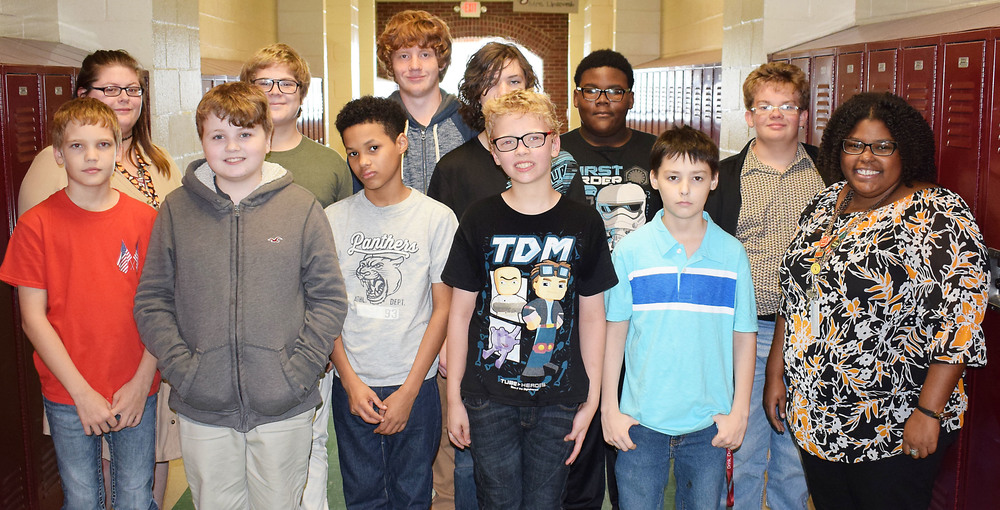 Dasnee McChristian has always practiced imaginative thinking and teamwork among her students, which has made her a natural as the sponsor of Blytheville Middle School’s robotics team. McChristian's goal for the students who will be part of her team is that they learn to apply science, technology, engineering and math concepts, plus a big dose of imagination, to solve their “hydrodynamics” problem.
McChristian and BMS are participating in “First LEGO League” this school year. FLL teams research a real-world problem such as food safety, recycling and energy, and are challenged to develop a solution. Each team must also design, build and program a robot using LEGO Mindstorms technology, then compete on a table-top playing field.
“The Imaginators” is the name of the robotics team, chosen by the students.
“We perform a project based on a real world issue,” stated McChristian, “such as in the Hydrodynamics Challenge. The human water cycle describes the ways people find, transport, use and then dispose of water in order to meet a specific need or desire.”
She went on to say that children in a small village outside of Kemba, Ethiopia, used to have to walk for several miles to obtain water from a well. At certain times of the year very little rainfall exists to save outside of drinking, cooking and washing, and the hours spent getting the water require the students to miss school. The village now has installed several new towers that are each able to collect up to 100 liters of clean drinking water, which has allowed the children to spend more time in school.
The FLL Core Values are the cornerstones of the program and are among the fundamental elements that distinguish the league from similar programs. By embracing the core values, participants learn that friendly competition and mutual gain are not separate goals, and that helping one another is the foundation of teamwork. Among those values are “we are a team”, “we do the work to find solutions with guidance from our coaches and mentors”, “we know our coaches and mentors don’t have all the answers, so we learn together”, “we honor the spirit of friendly competition”, “what we discover is more important than what we win”, “we share our experiences with others”, “we display gracious professionalism and ‘coopertition’ in everything we do” and “we have fun”.
The third part of FLL involves the robot game. Teams of up to 10 students, with at least two adult coaches, participate in the challenge by programming an autonomous robot to score points on a themed playing field and developing a solution to a problem they’ve identified, all guided by the FIRST LEGO League core values. McChristian said that the students would build their own robot, and it will be judged on durability and mechanical efficiency.
“I am very happy with the students who will be part of our robotics team,” she stated. “The type of student who would be attracted to this team are primarily students who enjoy working with their hands and are very inquisitive.”
Past challenges have been based on topics such as nanotechnology, climate, quality of life for the handicapped population and transportation. By designing challenges around such topics, participants are exposed to potential career paths within a chosen Challenge topic, in addition to solidifying the STEM principles that naturally come from participating in the program. Team members also learn valuable life and employment skills which will benefit them regardless of the career paths they choose.
McChristian said that the BMS robotics team has already applied for membership in the Searcy regional, but will go to the regional in Mountain Home if the one in Searcy is not available. The team’s first qualifier will be Dec. 9, probably in Searcy, and the FLL state event will be Jan. 19-20 at the University of Arkansas.