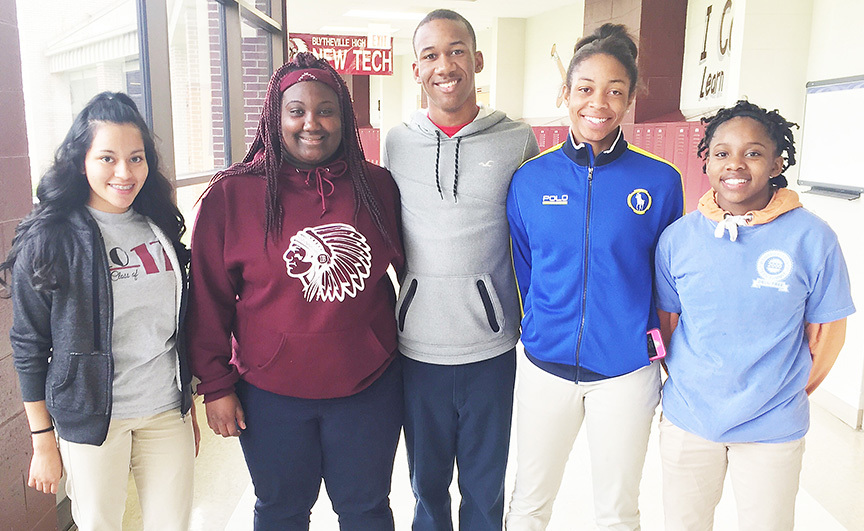 Six students from Blytheville High School were chosen this year as the first-ever Tobar Leadership Scholars, and will receive scholarships and/or all-expenses-paid trips to schools that Whiquitta Tobar spent several years at.

Tobar, a 2008 BHS graduate, received her Bachelor of Arts degree in political science and philosophy from Alabama A&M in 2012. She graduated from the Georgetown School of Law in Washington with her Juris doctorate degree, and currently is a Zubrow Fellow at the National Juvenile Law Center in Philadelphia, where she does policy work.

“Each of the applicants chosen have shown themselves to be leaders in their communities and school, and I am very proud to call everyone of these individuals a Tobar Leadership and Service Scholar,” she stated. “Their excellence should be acknowledged and broadcast in tribute of their hard work and to show other students that excellence is not only possible, but is expected of each of us in the community.”

Tobar is funding the two scholarships and two regional college tours through her gofundme campaign at gofundme.com. Hill and Guyton’s scholarships will be used at the colleges and/or universities of their choice. Soto and Rogers will tour Alabama A&M in June, and Bell and Campbell will arrive in Philadelphia on April 27 and travel throughout the northeast, visiting the universities through May 1.