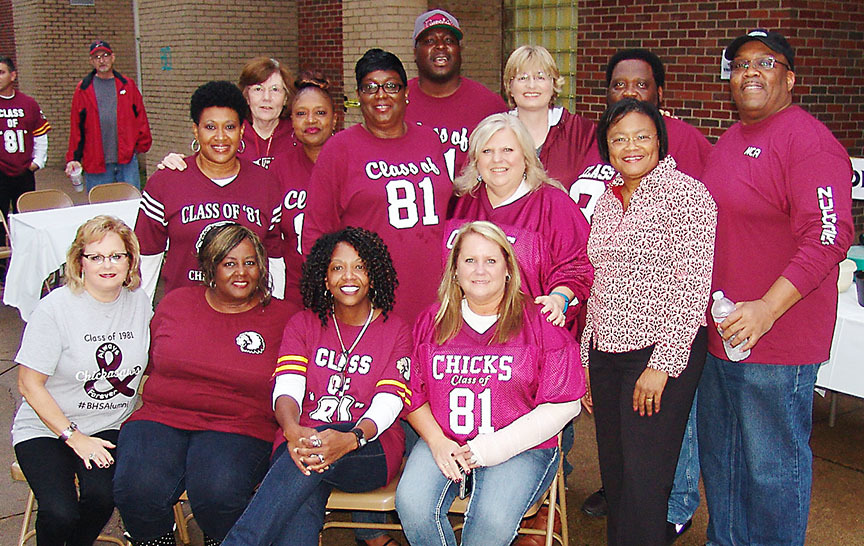 Homecoming Week to revolve around 'Chicks make your heart beat'

Members of the Blytheville High School Class of 1981 posed last Oct. 14 for a group photo during their reunion just before entering the Greene County Tech-Blytheville homecoming game at Haley Field that evening. BHS Student Council sponsor Michelle Hardy stated that reunions by the classes of 1987, 1992 and 1997 have already scheduled reunions, which will start with tailgating activities Friday just outside of Blytheville Middle School and continue through the weekend.

The Blytheville Chickasaws were defeated by West Memphis, Marion and Wynne in their previous three road games, and they believe the best way to climb back into contention in the AAAAA-East is by taking care of business when the Greene County Tech Golden Eagles invade Haley Field next weekend for homecoming. And judging by the excitement of the Blytheville High School students toward the annual event, “climbing back into contention” could be just what the Chickasaws are in line for.

Homecoming Week officially kicks off at BHS on Monday morning, and student council sponsor Michelle Hardy is eager for her students to assume leadership roles regarding several of the happenings at their school. “The students are excited about all of the activities that will take place during Homecoming,” she stated, “especially the opportunity to play the (Powderpuff) game on the brand-new Haley Field turf. This is ‘gearing up’ to be possibly the best Homecoming yet.”

Spirit days, with the students dressing similar to persons they look up to, will start Monday morning with “Medical Monday” clothing, in which students may dress like a doctor, nurse or injured person. “Throwback Tuesday” involves the students dressing in “old school” clothing. Wednesday is class color day, with students donning the clothing of their classification. Seniors will wear the color black, juniors blue, sophomores red and freshmen gold. ‘Partners in Crime” Day (or “Twin” Day) is Thursday, and the students and their “twins” will dress alike.

An automobile furnished by Bill’s Auto Salvage will be set up on the parking lot just to the east of the high school Tuesday at 11:15 a.m., and students will be able to exact revenge on the junk car, with the Student Council selling hits with the sledgehammer for one dollar per four swings. The automobile will remain on the BHS campus at least through Thursday.

The powderpuff football game, in which the girls will play flag football and the boys will serve as coaches and officials, will be Wednesday at 1:00 p.m. Admission will be one dollar per person, with the money being used by the council members for expenses related to Homecoming and the prom next spring. The games will feature the juniors versus freshmen and the seniors versus sophomores, with the finals pitting the two winners.

Hardy went on to say that each of the classes will be responsible for decorating a BHS hallway, with various community individuals to judge the hallways on Friday morning. In what has become a tradition at BHS, seniors on Friday will beat the Chickasaw drum throughout the entire day. The homecoming pep assembly will be Friday in the BHS Gym at approximately 1:45 p.m., which will include the presentation of the maids and their escorts and the crowning of the homecoming queen.

The Homecoming Parade will be Friday at 4:30 p.m., with various students and citizens riding on the the floats, classic automobiles and motorcycles, which begins near Cobb Funeral Home on Main Street. Contact Lori Hixson at 740-0664 for more information about the parade. The BHS classes of 1987, 1992 and 1997 have reunions next weekend, with an abundance of fans tailgating on the BMS east lawn next to Haley Field about one and one-half hours before the Eagles-Chickasaws kickoff.

Finally, pregame festivities featuring the homecoming queen and her maids escorted by their male relatives will be presented at approximately 6:30 p.m., with the football game to start immediately afterwards. The Spirit Stick winner will be announced during the game’s second half.