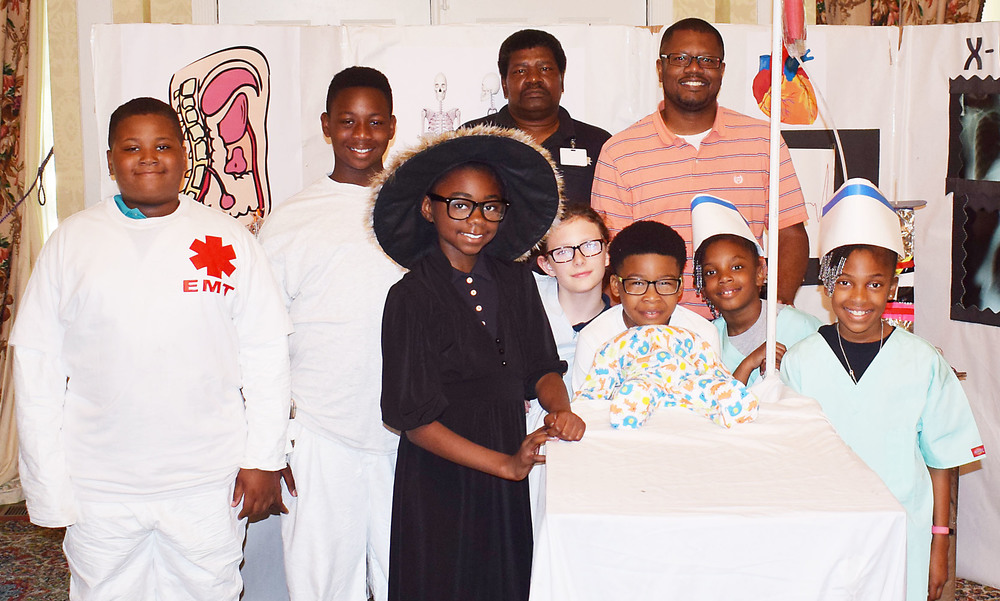 Members of the BES OM team that performed for the Kiwanians are (from left) Ja’Shawn Brown, Tyrone Davis, Shamari Cooper, Gatsby Langston, Marley Rand, McKinley Walker and Ryle Walker. The coaches are Curtis Walker, Sr., (in back, middle) and Curtis Walker, Jr. Not pictured is Diane Hay, director of the district's Gifted and Talented Program that includes OM.

The city of Blytheville was welcomed to East Lansing, MI or- as they call it - Spartan Country for the 38th annual Odyssey of the Mind World Finals competition. This event brought together nearly 6,000 of the brightest young minds on earth for an incredible week of tough competition, brilliant creativity and friendships to last a lifetime.

The Blytheville School District had one team that competed on the World Finals level: The elementary team coached by Curtis Walker, Sr., and Curt Walker, Jr., finished much higher than last year, taking 12th  place out of 36 teams in Division I “Ready, Set, Balsa, Build!”.

Creativity can be defined by using only what you have to get a job done. In this problem teams design, build and test a structure made of only balsa wood and glue that will balance and support as much weight as possible. The structure must include sets of balsa pieces of predetermined sizes and quantities as listed in the problem. Some sets must be parts of the structure while others, if incorporated, will receive additional score –  the more sets of pieces used, the higher the score. Teams will present a performance with a theme about using what’s available and that incorporates weight-placement and assembling original team creations. Members of Blytheville Elementary School team are Ryley Walker, McKinley Walker, Ja'Shawn Brown, Marley Rand, Tyrone Davis, Gatsby Langston Brown and (not pictured) Shamari Cooper.

It was, indeed, a creative extravaganza where more than 850 teams from all around the world shared their ideas and work. While only a few left with a trophy, everyone came out a winner just by solving an OM problem and competing on the world stage.

Nothing can match the enthusiasm and pageantry at the opening ceremonies of the OM World Finals. The Breslin Student Events Center was absolutely taken over on May 24 by 837 teams from 16 countries and 33 U.S. states, all doing their best to look as creative on the outside as they are on the inside. From long wizard robes to glowing glasses to hats that look like cats to team T-shirts and costumes of every kind, there was no doubt - this year’s teams are ready to get things started!

Program Director Sammy Micklus took the stage to a roar of cheers and introduced this year’s Spirit Award Winner, Joy Kurtz, went through this year’s mind-boggling problems and recognized the 2017 Odyssey Angels, Hope Heroes from Neuvo Leon, Mexico. This Odyssey group used creativity and empathy to develop specially-designed board games for the elderly and the disabled in their hometown. Sammy Micklus’ comments for the crowd were short but powerful. “The most important thing when you’re here is to have fun and make friends,” he said.

Next to address the crowd was OM founder Dr. Sam Micklus, who, naturally, had something very important to share with this year’s teams. “How many are here at World Finals for the first time? I hope it’s the best time of your life,” said Dr. Sam. “To get here, that means you’re the best in the world at something. No matter where you place in your competitions this week, you’re a winner to me. You give us all hope for a better world.”

The opening ceremonies closed with a wild electric light show and thousands of teams, coaches, parents and friends brimming with enthusiasm, hope and genuine spirited excitement for the week to come. Excitement was the word of the night as the jam-packed Breslin Center buzzed for Opening Ceremonies. After all, 33 states and 16 countries making up 837 teams are participating in this year’s competition.

NASA returned with a vengeance providing virtual activities and support for our young competitors.

OM is an international educational program whose mission is to provide creative problem-solving opportunities for students from kindergarten through college. Through solving open-ended problems, students develop creative-thinking skills that can be applied to real-life situations. Teams from throughout the U.S. and more than 20 other countries participate in the program.

Schools or community groups purchase a membership and form teams of up to seven students. Each team chooses one of five competitive problems to solve. The problems appeal to a wide range of interests; some are technical in nature while others are artistic or performance-oriented. Under the guidance of an adult coach, teams work on their solutions throughout the school year and, if they choose, present them in organized competitions in the spring. The "friendly" competitive aspect encourages students to be the best that they can be.

In the U.S., the first level of competition is usually within a region of a state. Teams who place are invited to compete at the state level. These championship teams are then invited to participate in the annual OM World Finals, where they compete with teams from countries around the world including Germany, Poland, China, Japan, Indonesia, Mexico, South Korea and Switzerland. New countries join the program each year.

As the founder of OM program, Dr. Sam Micklus, likes to say, “You have the most creative minds in the world, so be proud of your ideas! You are our future engineers, doctors, artists, performers and any other vocation you choose.” Of course all of this isn’t possible without our dedicated volunteers, coaches and parents. Your work facilitates the great minds of our future.

It’s hard to perform under pressure. No one understands that better than OM teams competing in the Spontaneous Competition in the World Finals. But what happens when you apply significant pressure over time to the element Carbon? You get a diamond. Many people, and teams, can respond to pressure in a similar way, becoming better and more valuable when pressure is applied.

Teams that make World Finals are pressure-tested and know their teammates from hours of working together, which helps them succeed no matter the challenge.

Michigan State University was honored to host Odyssey’s many brilliant teams and their families, and looks forward to their return!  Next year’s World Finals will be held in Ames, Iowa!

The Blytheville Schools extends a great big “THANK YOU” to the community for its generosity in helping us afford such a great experience for our students.