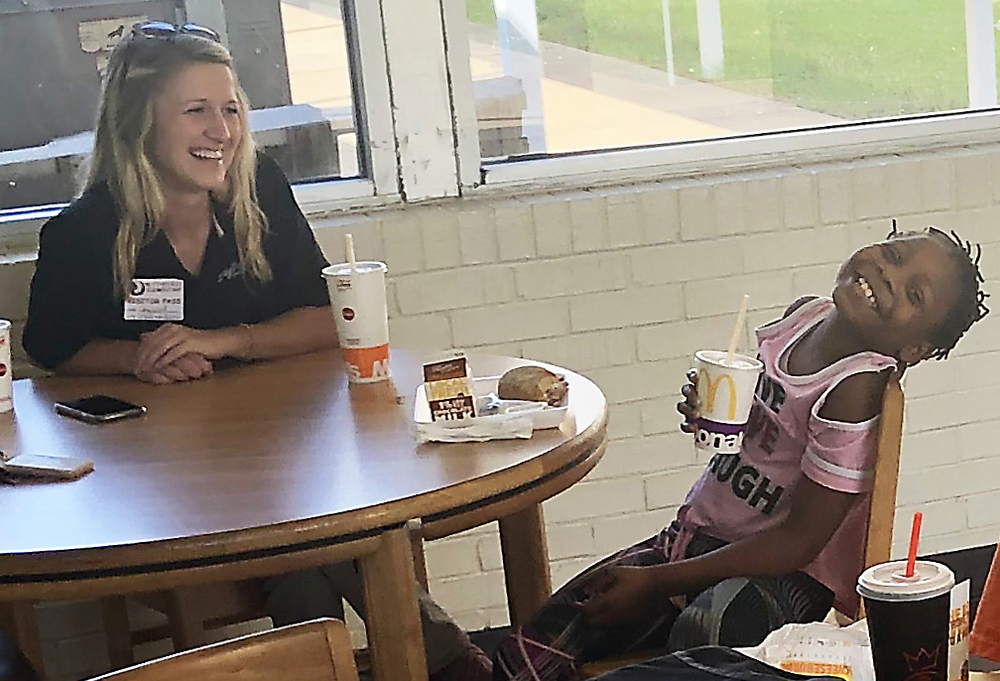 Cody Wyatt, director of the Parks and Activities office for the city of Blytheville, spends lunch with her “lunch buddy” Camiyah Johnson. Wyatt has three lunch buddies every Friday at Blytheville Elementary School and spends nearly two hours talking with them. The “Lunch Buddy” program, created by Lena Pierce and Shayla Adelowo, is a way for concerned citizens to spend a little time each week helping BES students by engaging in conversation and simply being a mentor for them.

When Lena Pierce provided handouts to each of the Blytheville Elementary School families advertising the school’s “Lunch Buddy” program early in the school year, she began by saying “Everybody needs somebody sometimes”. So far, BES teachers have paired approximately 25 students with adults who talk with those students during lunch, and Pierce is loving what she sees.
A “lunch buddy”, said Pierce, counselor at BES, “is someone to listen to, talk to, laugh with, but most importantly it is someone our students can depend on to be there for them. It’s a way for concerned citizens to spend 30-40 minutes once a week helping our children gain better relationships with their school community and their peers, engaging in conversation and being a mentor for them.”
Assistant principal Shayla Adelowo saw a video during a summer conference about “Lunch Buddies” and talked with Pierce about adding the program to their school. Pierce immediately began organizing it, and already she said she can see positive results.
“The program’s purpose is to help establish a caring relationship between students and community members in hopes of enhancing self-esteem, improving student attendance and motivating them to improve their academic and behavior performance,” Pierce stated.
Any person interested in participating in “Lunch Buddies” is asked to e-mail Pierce at lpierce@blythevilleschools.net or call 870-763-5924. Community citizens will be paired with a BES student, and mentors must commit to visiting with the same child once a week during that student’s designated lunch time. Third grade lunch period is 11:15 a.m.-11:45 a.m., fourth grade is 11:45 a.m.-12:25 p.m. and fifth grade is 12:15-12:45 p.m. Lunch buddies meet each Thursday or Friday at lunch.
Pierce relies significantly on teacher recommendations when deciding which students to ask to be a part of the program, but she also receives school data and has had a few students show interest in being a part of “Lunch Buddies”.
“Some students are selected because of the data we already have, but this is not a program just for “at-risk kids”,” she continued. “Several students just want to have another person to talk to at lunch, and students who regularly meet with mentors have increased daily attendance, have fewer behavioral issues, are less likely to engage in violence and less likely to begin using illegal drugs.
“Basically, we want our students to be the ‘best versions of themselves’ they can be. When stakeholders (citizens interested in the betterment of the schools) are included in any program, the students are more ‘bought-in’ to their education.”
Prior to the initial meeting with the student a list of rules and guidelines of what to expect are presented to the prospective mentor that he or she must sign.
According to Pierce, several citizens from Arkansas Northeastern College have enrolled in “Lunch Buddies”. A few local pastors are part of the program, as are local business owner Tobye McClanahan and a Blytheville Board of Education member. Cody Wyatt, director of Parks and Activities for Blytheville, has three “lunch buddies”, and remains for one and one-half hours every Friday with them.
“Ms. Adelowo and I originally set a goal of 20 “lunch buddies”, so we are extremely happy about what we’ve seen so far,” Pierce said. “It is my hope the students will be able to establish lifelong, meaningful relationships with their mentors, and that their educational experiences will be very positively affected.”
The responses of both the community members and students also appear to be quite positive. Tonya Osagie, who has two children who graduated from Blytheville High School, said she is excited both for her lunch buddy and herself each Friday when they get together, and Pierce added that one student remarked that he wished his lunch buddy could eat with him at school every day.