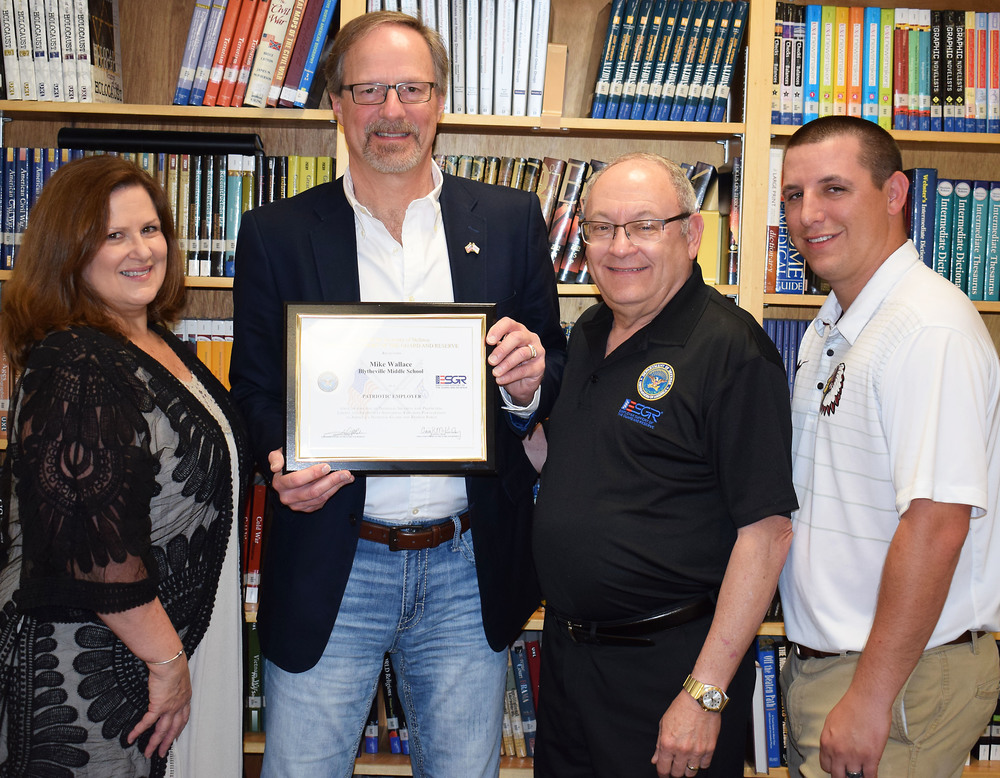 BMS principal Mike Wallace proudly holds the ESGR PATRIOT Award that was presented to him May 4 by Lt. Col Gil Fowler of Jonesboro. Also pictured is Wallace’s wife Dee Wallace and Chris McCormick (right), who nominated Wallace for the honor.

Blytheville Middle School principal Mike Wallace was honored May 4 with the Employer Support of the Guard and Reserve PATRIOT Award for allowing guardsman Chris McCormick “to do my job” in the Arkansas Army National Guard. Wallace received the award as a “patriotic employer for contributing to national security and  protecting liberty and freedom by supporting employee participation in America’s National Guard and Reserve force.”

Sgt. McCormick, a member of the 1036th Sapper Company in Jonesboro, spends his days as a civilian as a coach and teacher at BMS. He stated that “Mr. Wallace is a true patriot and an outstanding supervisor, and is very understanding when it comes to supporting what we do in the National Guard. He knows that when I am put on orders that it takes additional work on his part to get things done”, said McCormick.

“He is very professional at what he does, yet he takes the time to get to know who you are as a person. Mr. Wallace considers our workplace a team and a family, and he is a great mentor and supporter for me and the other citizen soldiers in northeast Arkansas.”

Presenting the award was retired Lt. Col. Gil Fowler of the U.S. Army, who also offered his appreciation to Wallace for his support of the National Guard and Reserve.

The Employer Support for the Guard and Reserve organization is a group of volunteers, many of them veterans, who are dedicated to helping recognize the importance of the citizen soldier and building a strong bond between the soldier and the workplace, “both key components to our nation’s defense and prosperity.”

The ESGR Patriot Award recognizes supervisors, bosses and businesses nominated by a Guardsman/Reservist employee for the support provided directly to them and to other veterans, thus making it possible for them to do their civilian jobs and serve their country at the same time.

“On behalf of a grateful nation and our citizen soldiers, congratulations and thanks for everything you do and will continue to do on their behalf,” Fowler stated. “I also congratulate and thank all the other employees and family members at BMS because they also handle the load each time a soldier has to miss work to fulfill his or her military duties. It truly is a team effort.”