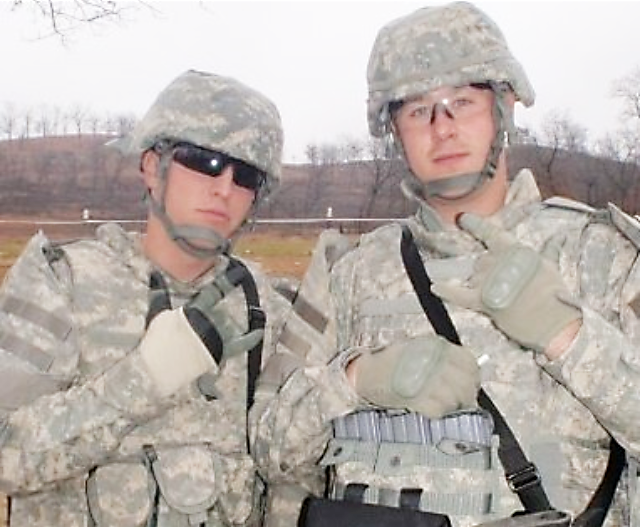 Chris McCormick (left) before engaging in an activity for the Arkansas Army National Guard.

Chris McCormick has seen more than his share of hardships and trials just in the last 14 years since enlisting in the Arkansas Army National Guard. And if he was pressed to tell of his experiences helping others, it would be to never take blessings for granted because you never know what’s lurking around the corner.
McCormick, second-year mathematics teacher at Blytheville Middle School and both head and assistant coach of the BMS and Chickasaw football, basketball and baseball teams, returned recently from the Houston area, where he and other National Guard members participated in relief efforts for the residents in the wake of Hurricane Harvey.
McCormick, living in Jonesboro, was practicing with the ninth grade football team when he received a call from his platoon sergeant, telling him to be at the local Armory the next morning at 6 a.m. because they were shipping out. The men loaded the vehicles with water, food, shovels and personal equipment, and left for Little Rock, Shreveport and finally to Union Junction, which is just north of Houston.
“We traveled for two and one-half days, and before we even arrived in Union Junction we could see the damage that the water had done to people’s houses and cars,” McCormick said. “Once we arrived in Houston, some of us went house to house in the areas hardest hit by the hurricane, making certain that area was secure and that nothing was being looting. Other guard members distributed food and water to area residents. It took a while, but when the relief efforts were completed we made our way back to Jonesboro.”
The Guard soldiers “cleared medical” (everyone was checked for the possibility of injury) on their way back from Houston. They unloaded all the water they had carried to Houston, and back in Little Rock they unloaded the food before returning to Jonesboro.
Arriving home Guard personnel needed six hours to unload all equipment from the vehicles. They then refilled the vehicles with fuel, washed them and performed various maintenance checks before parking the vehicles until the next trip. McCormick went on to say that the next morning the Guard members returned for their monthly drills, which included physical fitness and briefings for additional information such as proper vehicle preventive maintenance checks and services, sexual harrassment and suicide prevention. Following lunch the soldiers continued their classes on weapons systems, map reading and mine detector (sense and detection of buried mines and improvised explosive devices) before finally being relieved to go home and continue with their lives.
McCormick attended Arkansas Northeastern College the next fall after high school graduation, and also enlisted in the National Guard. He brought out that the Guard taught him the importance of teamwork, discipline and leadership. He was deployed overseas twice, in Iraq for 12 months in 2006-07 and Afghanistan for six months in 2009-10.
“My advice to anyone I talk to would be to never take anything for granted, whether it’s your good health, material possessions or any kind of status,” he stated. “You never know what a day may bring about, and the things you might have been collecting for years could be eliminated in a matter of minutes, and there would be nothing you could do about it.”