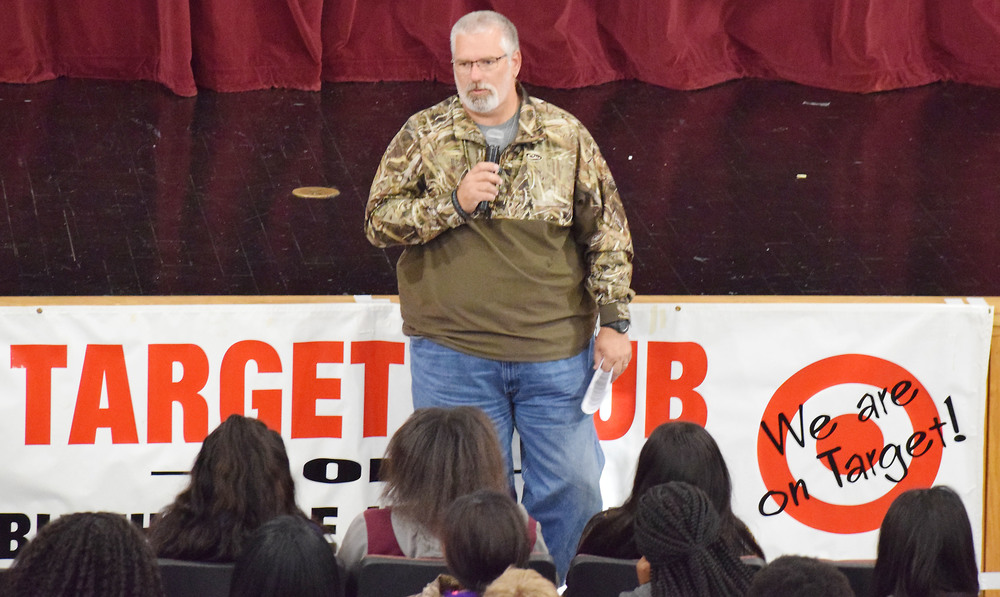 Bobby Ephlin, task force officer for the FBI, on Oct. 25 spoke with BHS seniors and juniors about his experiences with people who are addicted to opiates immediately after the students watched "Chasing the Dragon", an hour-long documentary about various individuals who have continued to fight their attraction to drugs.

Blytheville High School students on Oct. 25 were made aware of the growing addiction to opiates by many members of society in the hour-long documentary “Chasing the Dragon”: The Life of an Opiate Addict”. The documentary is aimed at educating students and young adults about the dangers of addiction.

The video, shown during Red Ribbon Week in the BHS Auditorium, first to seniors and juniors and then to sophomores and freshman, was sponsored by the BHS ‘TARGET’ Club but paid for by the Federal Bureau of Information and the Drug Enforcement Administration. Bobby Ephlin, task force officer for the FBI working primarily in Mississippi County, talked to students before the video was shown that “a large segment of the population is addicted to opiates”.

The video was rather hard-hitting and graphic, beginning with former FBI director James Comey and acting DEA administrator Chuck Rosenberg stating that prescription drug and heroin abuse has become a crisis and “is killing far too many people”. “Once addiction starts,” said Comey, “it is often too late. By telling somebody, you could be saving a life.”

Immediately, people in the video began telling their stories. Most of the persons being interviewed were either passed drug abusers or still having difficulty with the habit, and one person, “Trish”, was the mother of an addict who she said later died.

“Chasing the Dragon” is a term that is more complicated than merely “smoking opium”. As “Matt” said, it is “constantly seeking that first high. But what’s going to happen if you actually catch it?”

“Matt”, “Sarah”, “Katrina”, “Julia”, “Trish”, “Cory” and “Melissa” then began telling their own experiences of what their lives were like when they first began experimenting with drugs. One was making $122,000 a year at the time, another had a grade point average near 3.5 and another achieved Eagle Scout status at 18 years of age.

Physicians and other medical personnel were interviewed throughout the documentary, with Dr. Deeni Bassam stating that a person may be complaining about having a “bad day” and then takes a pill from a friend, who says ‘this will help you feel better’. “That’s how this problem always starts,” said Bassam.

“Trish” stressed that she is very angry that her daughter’s addiction led to her death. “And one of the things I am most angry about, and I told her all the time, is that, that drug was so much more important to you than me”, she said. “And I am the one that can help you. But something that literally destroyed everything good within you was so much more appealing,” wanted that so much more than anything I could offer her, and I’m angry. I am angry about that.”

“How do you know you’re an addict?,” Bassam continued. “It’s when you’re doing something that you know is not good for you, that’s harming you, but you can’t help yourself. When your relationships are starting to fall apart around you and you don’t care, and the only thing that’s on your mind is about how to get the substance and how to get to the next high—you’re an addict. You can’t maintain an opiate addiction and a normal life for very long.”

According to “Katrina”, you will be high and put yourself in situations that you will get hurt. Someone will take advantage of you. You know, could be knocked out; it’s gonna happen. You’re gonna get hurt.”

According to the documentary, a large number of people who are arrested for various offenses are under the influence of drugs when they commit those offenses. Children of abusers also suffer, but the abusers care only about getting the drugs.

“Melissa” pointed out that “I had an abscess in my leg that was so bad, I had a staph infection; my leg was like four times its normal size. When the doctors cut my leg open to clean it out, I had maggots in my leg. They were eating the rot, the infection.”

Each day, 44 people in the United States die from opiates, the documentary said, and more than 93 percent of the people who need treatment for their drug abuse claim beforehand that they don’t need it.

After watching the video, Ephlin stated that once a person develops an addiction to opiates, “you can’t beat it; you can’t win,” he added. “And once you ‘open the door’, there is no telling what that addiction will do to you.”